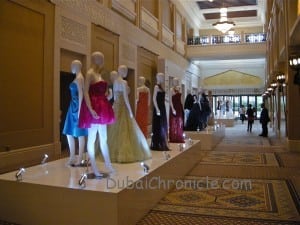 With strategical efforts and proper development of the fashion industry, Dubai could score high and turn itself into a global fashion hub along with pillars of the fashion world such as Paris, Milan and New York. According to Steven Kolb, Chief Executive of Council of Fashion Designers of America (CFDA), the Dubai has a great potential to develop a strong industry and place itself among fashion capitals of the world.

During the recent Fashion Forward event held in Dubai, Steven Kolb visited the city and expressed his opinion that although there was a lot work still to be done, he also saw great achievements. CFDA represents some of biggest names in the fashion world – Ralph Lauren, Calvin Klein and Diane von Furstenberg, and as Chief Exec, Kolb was a guest of honor at Middle East’s largest fashion event, the inaugural season of Fashion Forward. The event was designed to help fashion industry in UAE and the Middle East to step more confidently on the world stage. During April’s Fashion Forward the region’s established and emerging talents showed their collections in a series of catwalk shows, panel discussions, and social meetings.

The idea that Dubai could become an important destination for the global fashion has been created during Fashion Forward, when it became clear that there is a local talent that needs to be seen, and a lot of media interest to show not only established designers, but also a newer generation of talents. These, according to Kolb, are very important components of fashion industry, but there is still a lot to be done. The question is, will we see the joined efforts of leading designers, business representatives, and industry consultants towards developing an “ecosystem of fashion”. The hardest task is connecting all spheres of design, manufacturing, retail, media, international partners and stakeholders. Kolb also admitted that nothing happens overnight, and that the development of large fashion industry in Dubai takes a lot of efforts and commitment.

Visiting Dubai is a great opportunity to CFDA’s Chief Executive to find new connections and build relationships that will contribute to the global presence of the Council of Fashion Designers of America. And Dubai has a real potential to become a global fashion hub as technology changes business and economies and the concept of fashion capital is losing its relevance.