Suzanne Al Houby, a Palestinian-born and UAE-based mother of two, has become the first Arab woman to reach the summit of Mount Everest, the world’s tallest mountain. 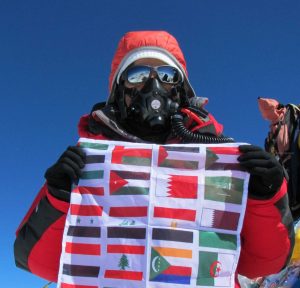 Al Houby reached the 8,848-metre peak at 8:45AM on May 21, 2011, marking this triumph of the human spirit for the Palestinian people and, indeed, for the people of the Arab world as a whole.

Originally from Jaffa, Palestine, 40-year-old Al Houby spent 51 days scaling Mount Everest as part of a four-person team, three of whom successfully reached the summit. Since the world’s highest peak was first scaled by Sir Edmund Hillary and Tenzing Norgay in 1953, roughly 100 women from across the world have achieved this astonishing feat.

A lifelong mountaineer, Al Houby is no stranger to the record books. In 2003, she became the first Arab woman to reach Everest Base Camp. She is also the first Arab woman to scale Mount Elbrus, the highest point in Europe, and the first Palestinian woman to climb Mount Kilimanjaro, Africa’s highest peak. To date, she has successfully reached the summit of the highest mountains on five of the world’s seven continents. 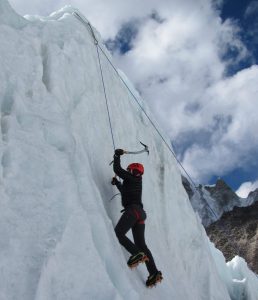 “I will never forget the moment when my dream became reality, when I saw the prayer flags flapping in the thin air, marking the summit of the greatest mountain on earth,” Al Houby recalls. “Standing on the summit, I looked left to the mountains of Nepal, then looked right to the mountains of China – all of them far, far below. I raised my hands, thanked God and hugged my climbing partners.

“Becoming the first Arab woman to reach the top of the world was an enormous thrill and a great privilege,” she added. “I would like to share this triumph with the Palestinian people and all Arabs – especially all the Arab women, young and old, who continue to contribute to the peace and stability of the region we all call home.”

Al Houby, who spent nearly two years preparing for the ascent of Everest, was provided supported by the Welfare Association, a leading Palestinian non-governmental development organisation dedicated to contributing toward furthering the progress of the Palestinian people by preserving their heritage and identity, supporting their living culture, and building civil society institutions.

In addition, she was provided ongoing support by Arabtec Construction, the leading construction company in the United Arab Emirates with a multinational team of more than 52,000 highly qualified staff. Since it was established in 1975, Arabtec Construction has executed a diverse and far-reaching portfolio of major construction projects in all sectors of real estate and infrastructure.

From Dubai’s skyscraper to Everest