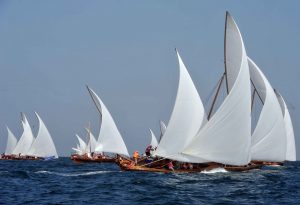 â€˜It was a fast race with a good strong breeze and we made some good decisions,â€™ said the Dahees skipper. â€˜Itâ€™s exciting to do so well and get a first place. Last season our highest place was fourth and we came thirteenth overall. So this is a really encouraging start.â€™

The fleet of seventy boats were originally due to race 29 nautical miles from Moon Island to Mina Seyahi but the strong winds on Thursday night made the trip to the starting line too hazardous as the rough sea can flood the shallow hulled boats. So the organizers, Dubai International Marine Club, made the decision to hold a shorter race inshore.

An invitational round of the 60ft dhows will be held on November 20th during the Louis Vuitton Trophy where the sailors from BMW Oracle, Emirates Team New Zealand, Mascalzone Latino, Synergy, Artemis and All4one will race on the dhows.