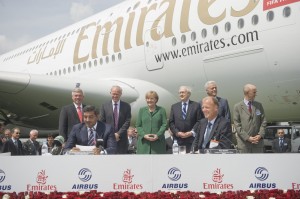 EmiratesÂ  the Dubai-based international airline placed an order with Airbus for an additional 32 A380 aircraft taking the total firm order for the iconic flagship of the 21st century to 90 super-jumbos.Â  The order for the additional aircraft has a list price of $US 11.5 billion (AED 42.2).

â€œThis latest order, adding to 58 A380s previously ordered, affirms Emiratesâ€™ strategy to become a world leading carrier and to further establish Dubai as a central gateway to worldwide air travel.Â  The A380 is our flagship in terms of passenger comfort, innovation, operating and environmental efficiency and revenue generation,â€ said H.H. Sheikh Ahmed Bin Saeed Al- Maktoum. â€œOur latest commitment signals Emiratesâ€™ confidence in the growth to come in a thriving aviation sector as we build our fleet for tomorrow,â€ he added.

â€œEmirates supported the development of the A380 from the earliest days, a project employing tens of thousands of Europeâ€™s best people and todayâ€™s increased order, is the best endorsement I can imagine. On behalf of all of us at Airbus, we thank Emirates for their support. The A380 is indeed a remarkable eco-efficient aircraft, a profit generator for airlines and a great flying experience for passengers,â€ said Tom Enders. 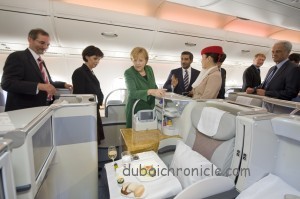 Emirates, the second largest airline in the world in available seat kilometres, is on track to become one of the largest airlines in the world.Â  In addition to the orders placed today, Emirates has 48 Airbus 380s, 70 Airbus 350s, 18 Boeing 777-300s and 7 Boeing air freighters on order totaling 143 wide-body aircraft worth more than $US 48 billion. In a year where the aviation industry was rocked by the economic downturn, Emirates Airline recently reported its 22ndÂ  year of profit, up 416 percent to close at US$ 964 million (AED 3.5 billion) over its 2008-09 profits of US$ 187 million (AED 686 million).

From the delivery of its first A380 in July 2008, to receiving its 10th A380 on 7th June 2010 from the Airbus plant in Hamburg, Emirates is now serving eight international destinations with the super-jumbo aircraft including London Heathrow, Toronto, Paris, Jeddah, Bangkok, Seoul, Sydney and Auckland. The airline will start A380 services to Beijing from 1st August, Manchester from 1st September and will return service to New Yorkâ€™s John F. Kennedy (JFK) airport on 1st October.Â  Emiratesâ€™ looks forward to expanding the list of destinations at more than 100 airports around the world as A380s become ready.