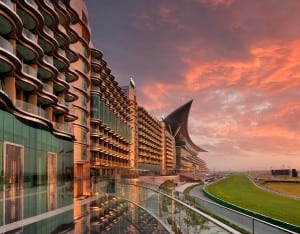 Jumeirah Group was appointed to manage The Meydan, which opened its doors to its first guests earlier this year. Since then, the hotel has seen the official opening of the Meydan Grandstand and Racecourse and hosted guests of the 15th Dubai World Cup on March 27. It has also opened several F&B establishments including Farriers, the all-day dining restaurant, Prime, its exclusive steakhouse overlooking the racecourse, as well as a new luxury Japanese dining experience, Shiba, along with a new fitness centre and spa.

The agreement will cover the management of the five-star hotel property, which includes 285 luxury guest rooms and suites, conference facilities and a business centre, restaurants and bars, a spa, fitness centre and other leisure facilities.