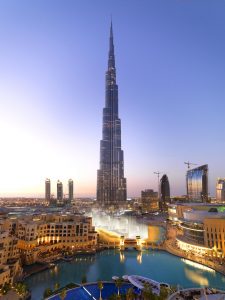 Burj Khalifa, the world’s tallest building by Emaar Properties, will receive its first residents as early as February 2010. They will be the first of over 12,000 people who will live and work in the mixed-use tower comprising luxurious apartments, prime office space and the world’s first Armani Hotel, amongst other modern lifestyle amenities.

Following the inauguration of Burj Khalifa on January 4, 2010 to mark the fourth anniversary of the Accession Day of His Highness Sheikh Mohammed Bin Rashid Al Maktoum as the Ruler of Dubai, Emaar will immediately take charge of the property from various consultants, contractors and suppliers. From January 5, the public can access At The Top, Burj Khalifa, the world’s highest observation deck on Level 124 of the tower.

The planned hand-over to residents of Burj Khalifa will begin in February, 2010. The luxurious Armani Residences on levels 9 to 16 will open their doors first, to be followed by the much-awaited Armani Hotel Dubai, which occupies the concourse to Level 8 and Levels 38 & 39, to be unveiled to guests in March.

The Residences, comprising 900 apartments, and The Corporate Suites, a collection of high-end offices, will be handed over to customers from March. The handover programme can take anywhere from two to six months.

An orientation programme for customers is currently ongoing, taking them through the Burj Khalifa lifestyle experience that awaits them. Emaar has also written to all of its customers to inform them of the handover schedules, as the interiors of homes and offices receive their finishing touches.

Mr. Abdulla Lahej, Executive Director, Dubai Project Management, Emaar Properties, said the delivery of the various components of Burj Dubai had been carefully structured to accommodate as smoothly as possible the expected tower population of more than 12,000 people, adding that phased delivery is normal practice for a project of this magnitude.

The first homes to be occupied at Burj Khalifa, at the Armani Residences Dubai, reflect the individual style of the designer – Giorgio Armani. The 144 one and two-bedroom apartments have an understated elegance and artfully combine form, space and lighting, and use furnishings that focus on the compatibility of materials.

The Residences at Burj Khalifa are 900 studio, one, two, three and four-bedroom apartments spread over levels 19 to 108. Facilities for residents include upmarket gourmet convenience stores – The Gourmet Market – and a meeting place. Valet parking is also provided for guests and visitors.

For the added convenience of home owners, Burj Khalifa features Sky Lobbies on levels 43, 76 and 123 which offer numerous state-of-the-art fitness facilities close at hand including spa and wellness facilities. The Sky Lobbies on 43 and 76 each house swimming pools and a recreational room for exclusive receptions and other gatherings.

The Corporate Suites inside Burj Khalifa occupy 37 floors. Entrance is from the tower concourse, and express lifts take visitors directly to the lounge lobby at Level 123.

With a height of more than 800 metres (2,625 ft), Burj Khalifa is the world’s tallest building and has 160 storeys the most floors in any building in the world.

A mixed-use tower featuring the world’s first Armani Hotel Dubai and Armani Residences, alongside corporate suites, residences, retail and leisure facilities, Burj Dubai is at the centre of Downtown Burj Khalifa, a 500-acre mega-development by Emaar Properties. Among an array of lifestyle amenities, the tower will have a public observation deck – At the Top, Dubai – on level 124.