The Palazzo Versace Dubai hotel is scheduled to open its doors next year, according a number of most recent media reports. However, the construction works on the building seem to be halted in recent days. Passing by, one can’t see workers rushing back and forth on the construction site. This may be due to the hot summer weather in Dubai, but still construction works on many other projects in Business Bay continue as normal.

Although until recently the hotel was said to be ready by the summer of 2013, the opening date is now pushed a little further in time to 2014. Judging from the state of the construction, the opening day is more likely to fall sometime in the second half of 2015. Despite rumours claiming that the main reason for the delay is financial problems, the developer behind the project insists that this is due to the lack of electricity and water on the project’s site.

The construction of Palazzo Versace Dubai at first started in 2006. It was planned to be finished three years after that. However, its completion was hindered and prolonged in time. 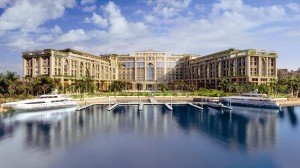 The cost of the Palazzo Versace Dubai amounts to $626 million or AED2.3 billion, according to the developer. The hotel will be located opposite to the Festival City and in the Dubai Culture Village master development.

The project includes the construction of two Versace-branded residential buildings. They will consist of nearly 170 separate units. The hotel itself will have more than 200 suites which again will have the distinct Versace design and style. Of course, the furnishing will be all Italian and all Versace. The resort will also have day spa, restaurants, lagoon-style pool, as well as conference and meeting facilities.

The latest construction update issued by the developer reveals that both external and internal works on Palazzo Versace Dubai have been progressing. How fast is this happening is another question, as the project is already 5 years behind schedule. 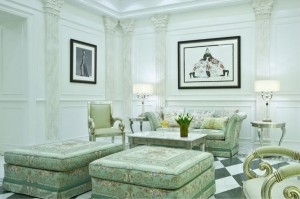 Even though the Palazzo Versace Dubai hotel and resort is yet to be finished, its name is already included in various lists for fashion branded hotels in the world along with another designer hotel in Dubai – Armani Hotel Dubai.

Dubai’s ambitions to become one of world’s fashion capitals strengthened in recent months with the launch of a number of fashion-dedicated projects and events. Experts are confident that the city has an actual potential to turn into Middle East’s fashion capital.

In addition to the Dubai Design District project which was recently launched and a number of new events such as Fashion Arabia and Fashion Forward, fashion branded hotels are expected to enhance further the city’s reputation as a true hub for fashionistas from the region.