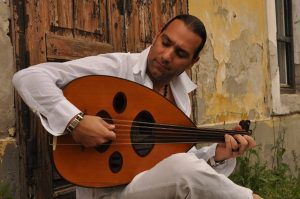 Chosen by international artist Quincy Jones, Iraqi Oud player Omar Bashir is just one of the artists in the world to participate with Jones in his GLOBAL GUMBO ALL STARS musical on Wednesday, July 20 at the next Festival de Kastel Perlada in Spain).

Quincy Jones is a superstar of the American music industry – his career spans over 50 years and he has won 27 Grammy Awards, including a Grammy Legend Award in 1991. He is famous for his work in film and opera and he has also been instrumental in helping to launch many music careers, including that of Michael Jackson.

Omar Bashir considers Quincy Jones’ use of his music a great responsibility because the work represents firstly the Arab Oud, combined with the genius of Jones, which has provided wonderful work in recent years.

Bashir described the involvement in the Kastel de Perlada Festival in Spain as a new way for him to express his passion for the oud, stressing that this choice is an important step towards showcasing the oud world that was started by the late Munir Bashir artist in the early fifties.

He added that the selection of Quincy Jones and his participation in the festival will help to show him as a global and innovative leader who can contribute to activating the role of the Arab lute dialogue of civilizations in the world using the language of art. He would also encourage heritage preservation and protection of the lute and present this to the world from a new perspective.

Omar Bashir said the selection of stars of the Worlds by Arab artists and their work of music or art is a renewed call addressed to the sons of the Arab nation, urging them to prepare well for the future in all areas, including the arts, on the basis that he must work to protect the consciousness of generations of falsity. By being technical on the one hand and by adhering to the cultural and artistic heritage on the other hand, with attention to the development of creative activity on various topics, even to rival all the artists in the world.

About Omar Bashir:
Omar Bashir is the son of the late Munir Bashir. Omar is one of the most important Oud players in the Arab world and the Western world. Making his own way, he has integrated Arabic music with Western music in the evenings presented by the art and through his 19 albums. Omar Bashir continues to create a path in his career with great prospects for the lute humanity the world over.