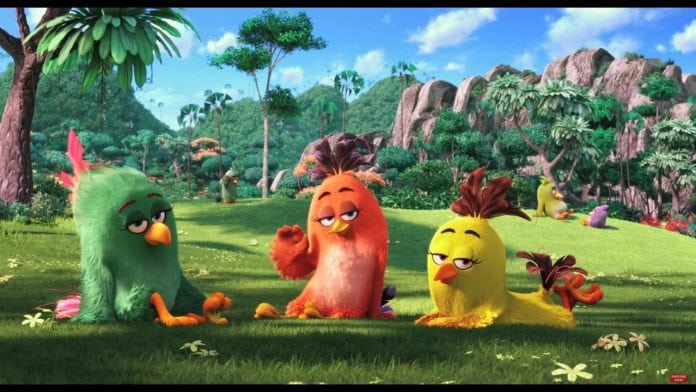 The tech industry outshone Hollywood at its own game during the past weekend, as a group of cartoon birds popularized by a smartphone craze (explore it here) flew past some of the world’s biggest movie stars to the top of the North American box office.

Parents need to know that The Angry Birds Movie is a loud, silly, sometimes crude — and sometimes funny — animated film based on the popular app.

The main character, Red (Jason Sudeikis), is truly an angry bird: He tries to exist in polite society, but his bad attitude won’t let him, so he’s forced into anger-management class.

As you might expect, there are plenty of scenes of birds being kicked, punched, and hurled through the air, as well as explosions. Eggs are stolen from their parent birds and put in peril, and their parents are visibly upset. Language includes “idiot,” “weirdos,” quite a few “butt” jokes, and cursing stand-ins like “pluck my life.”

Although there’s only one main female character, the movie has some messages about taking responsibility and not judging others. But mostly its goal is to be funny — putting it squarely in the category of movies that kids will like and parents will tolerate.

There’s a little bit of a moral about being inclusive, but that’s not why this movie was made: It’s about angry outbursts, birds catapulting through the air, and big explosions. Still, for a movie based on an app, Angry Birds has a lot of story to it. You’ll learn why the birds are so angry and what led to their ongoing war with the green pigs. It takes a while to get to that war, but once it does, the movie has plenty of action.

And while this certainly isn’t the best animated buddy comedy, its also not terrible. The animated world that’s been created is fun to look at, and there are some funny scenes — although a good bit of it is rude humor. The cast is really good, especially Sudeikis, Rudolph, and Gad.

The set-up is a little slow, but the end is all action. And you don’t need to know anything about the game to understand what’s going on.

Bottom line? Little kids might find it too loud, with too many pratfalls and explosions, and parents might find it a little annoying. But elementary schoolers who know the game will be entertained.