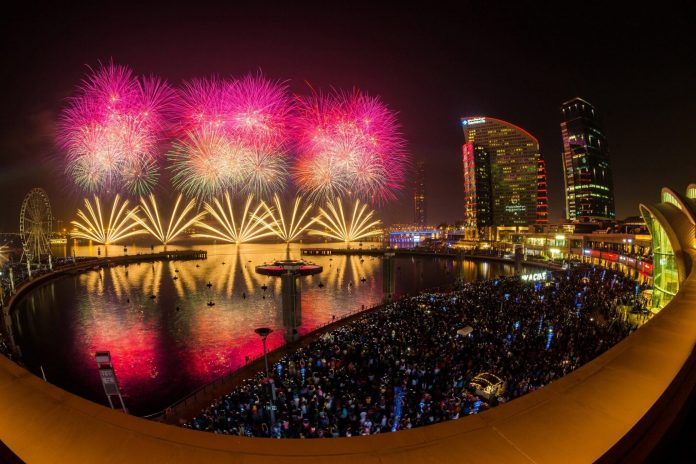 Dubai has announced a packed programme of events and activities for New Year’s Eve, which will see an array of entertainment activities, fireworks and concerts taking place across the city.

As the city prepares for head-turning celebrations, Dubai Shopping Festival (DSF) and Dubai Calendar revealed the main events and activities taking place to usher in the New Year.

Dubai launched the DUBAI ASSURED stamp, a compliance programme to certify all establishments in the tourism ecosystem that have complied with safety guidelines. With Dubai being endorsed by the World Economic Forum as one of the world’s safest destinations, it received further global recognition – the World Travel & Tourism Council awarded the Safe Travels stamp to Dubai for the effective citywide management of the pandemic.

Dubai Shopping Festival’s visitors will be treated to a host of entertainment on New Year’s Eve with Dubai Festivals and Retail Establishment (DFRE).

This New Year’s Eve, head over to the DSF Market at Al Seef presented by Al Foah to watch the Al Seef Sea Kite Show, as well as the DSF Market at Al Khawaneej, which has been created with an Enchanted Garden theme inspired by ‘Alice in Wonderland’ and includes zones such as the Magic Maze, Tea Party, outdoor cinema, arts & crafts plus a Talking Tree and Wishing Lake.

It will also feature different activations and entertainment surrounding the classic children’s book and an exciting 3-minute multimedia show on New Year’s Eve highlighting the trees in the middle of the lake at Al Khawaneej. The spectacular multimedia technology shows with laser, lights, sound and video projection will be held at 8pm, 9pm, 10pm, 11pm and midnight.

Dubai’s Roads and Transport Authority is providing residents and visitors with an experience of watching the fireworks through their marine transport service.

DJ and producer Joel Corry will lay down the soundtrack to the New Year at Zero Gravity.

The celebrations will contribute to further enhancing domestic tourism by attracting citizens and residents from other emirates to enjoy the many experiences and varied promotions the city has to offer, in line with the UAE Strategy for Domestic Tourism announced by His Highness Sheikh Mohammed bin Rashid Al Maktoum, Vice President, Prime Minister and Ruler of Dubai.