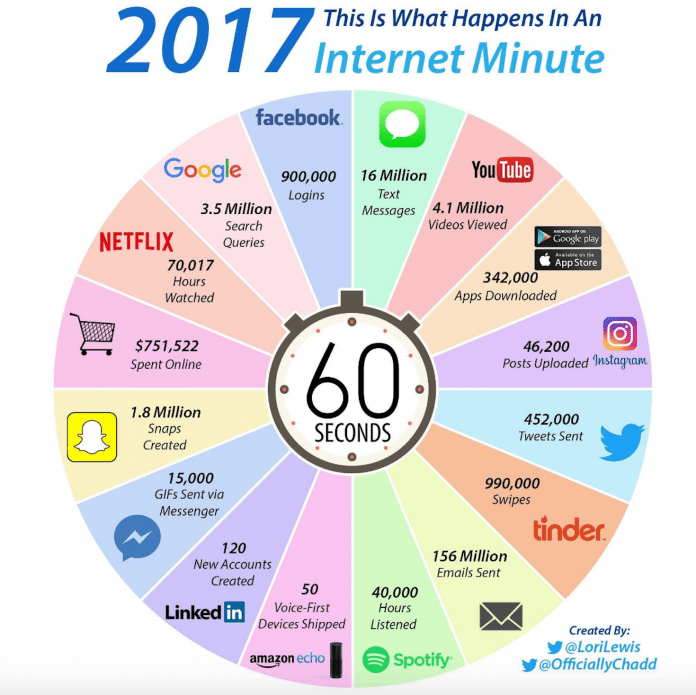 Just a month ago, it was revealed that Facebook has more than two billion active monthly users. That means that in any given month, more than 25% of Earth’s population logs in to their Facebook account at least once.

This kind of scale is almost impossible to grasp.

The scale of the internet is so great, that it doesn’t make sense to look at the information on a monthly basis, or even to use daily figures.

Instead, let’s drill down to just what happens in just one internet minute:

Created each year by Lori Lewis and Chadd Callahan of Cumulus Media, the above graphic shows the incredible scale of e-commerce, social media, email, and other content creation that happens on the web.

In a social media universe where there are no barriers to entry and almost infinite amounts of competition, the content game has tilted to become a “winner take all” scenario. Since people don’t have the time to look at the 452,200 tweets sent every minute, they naturally gravitate to the things that already have social proof.

People look to the people they trust to see what’s already being talking about, which is why influencers are more important than ever to marketers.

Eyes on the prize

For those that are able to get the strategy and timing right, the potential spoils are salivating:

The never-ending challenge, however, is how to stand out from the crowd.