The best polo in Dubai comes with this magnificent tournament that will be held up to March the 9th in the Dubai Polo & Equestrian Club.

The first match of the day brought a renewed Bin Drai Polo Team that had a very tough match against Mahra Polo.

Led by a great performance from Juan José Brane, Bin Drai added their first two points in the tournament.

After a first chukker with Mahra leading the score Bin Drai took the lead in the second period and never gave it up, registering during the second chukker 3 consecutives goals.

With Brane as the top scorer of his team, adding goals in almost every chukker, Bin Drai arrived to the third period with a 4-3 advantage. Mahra reply with one goal by Agustín Canale but once again Bin Drai took the control of the game.

In the last chukker, Mahra´s back player Nacho Gonzalez put a little suspense in the score but inmediately Brane replied with the definitive 7-4 Bin Drai´s victory. 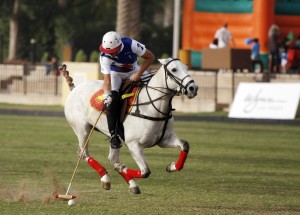 Mohammed Al Habtoor´s team obteined a dramatic victory against Zedan by scoring the last goal with only 30 seconds to go with a 40 yards penalty by Guillermo Cuitiño.

After a 2-1 lead by Habtoor Polo in the first chukker, both teams offered a great second chukker full of emotion and goals.

Patron´s Mohammed Al Habtoor and Amr Zedan with excellent individual actions added goals to their teams in a period that begun with a 2-2 and finished 5-4 for Habtoor.

Zedan put a 5 apiece in the third chukker and in the last chukker Guillermo Cuitiño became the man of the match by scoring two decisive goals for the Habtoor Polo victory.

The KBL Dubai Gold Cup will continue tomorrow with the winner of the Silver Cup 2012, Abu Dhabi against Ghantoot at 4.30 pm in the main field of Dubai Polo & Equestrian Club.