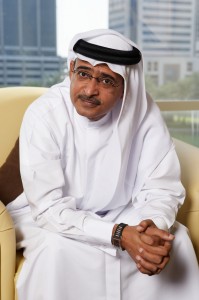 The French Government has honoured Abdulhamid Juma, Chairman of the Dubai International Film Festival and the Gulf Film Festival, with the ‘Knight of the Order of Arts and Letters’ award (Chevalier de l’Ordre des Arts et des Lettres) for his contribution to the field of arts and culture.

His Excellency Frederic Mitterrand, French Minister of Culture & Communication, presented the award to Abdulhamid Juma at a ceremony held at the official residence of the French Ambassador to the UAE, His Excellency Alain Azouaou.

The honour recognises Mr. Juma’s outstanding contribution towards promoting cinema in the Gulf region and Middle East – particularly French cinema – and for his role in promoting cultural diversity. The ‘Knight of the Order of Arts and Letters’ award is seldom bestowed on non-French nationals, and the Festival chairman is one of very few individuals from the Middle East to receive the award.

The order, created in 1957, has previously been awarded to Lebanese diva Fayrouz, American film icon Clint Eastwood and late president of the Czech Republic Vaclav Havel, among others.

His Excellency Frederic Mitterrand, French Minister of Culture & Communication, said: “Under Abdulhamid Juma’s leadership, the Dubai International Film Festival has become a festival renowned not only in the UAE and the Arab World, but also all over the world. In addition, the Dubai Film Market has become a “must-be place” to fund films in the Arab world; together, their international acclaim attracts more and more French and international authors, directors and producers every year.”

Juma said: “I am truly honoured to receive this distinction from the French Government on behalf of the Dubai International Film Festival and the Gulf Film Festival. It is a recognition of DIFF’s commitment to strengthening intercultural dialogue, reflected in the festival’s central credo, ‘Bridging Cultures, Meeting Minds.’”

He added: “France’s contribution to the world of cinema is unparalleled, from its auteurs inspiring filmmakers over the ages to its continuing support of emerging talents. Over the years, Arab cinema has benefited immensely from French collaborations – both in terms of production and creative support. French cinema has been a consistent and illuminating part of our programming both at DIFF and the Gulf Film Festival, and we will continue to draw on its richness and diversity.”

The festival also celebrated French cinematic excellence with a dedicated ‘In Focus’ segment in its sixth edition in 2009; in 2010, the Gulf Film Festival honoured French filmmaker Francois Vogel for his innovative style of filmmaking, screening his movies in the ‘In Focus’ programme, and in 2011, GFF put the spotlight on experimental filmmaker Gérard Courant, who holds the world record for the longest film ever made, the 156-hour Cinématon.