The biggest problem many countries are currently facing with respect to the coronavirus is, strictly speaking, a mathematical one: exponential growth. Due to the fact that SARS-CoV-2 is a new type of coronavirus, there is no herd immunity, meaning that everybody is susceptible to infection and the virus is likely to spread exponentially.

That is what we saw in China in early February and what we’re currently witnessing in large parts of Europe and in the United States. Countries such as Italy, Spain, France and Germany are seeing the number of cases double every three to four days, with the U.S. seeing even faster growth than that. If that rate of growth isn’t slowed down significantly, we’ll have tens if not hundreds of thousands of cases in many countries in a matter of a few weeks. That’s the problem when dealing with exponential growth: what starts off relatively slow, quickly snowballs and, before long, becomes unmanageable.

While experts are agreeing that the spread of COVID-19 cannot be stopped, it can be slowed down significantly by measures currently summed up under the term “social distancing”. By limiting human contact, we can reduce the transmission rate significantly, which in turn increases the time it takes for cases to double. Thanks to the nature of exponential functions, such measures can have a huge effect on the total number of cases after a given time. 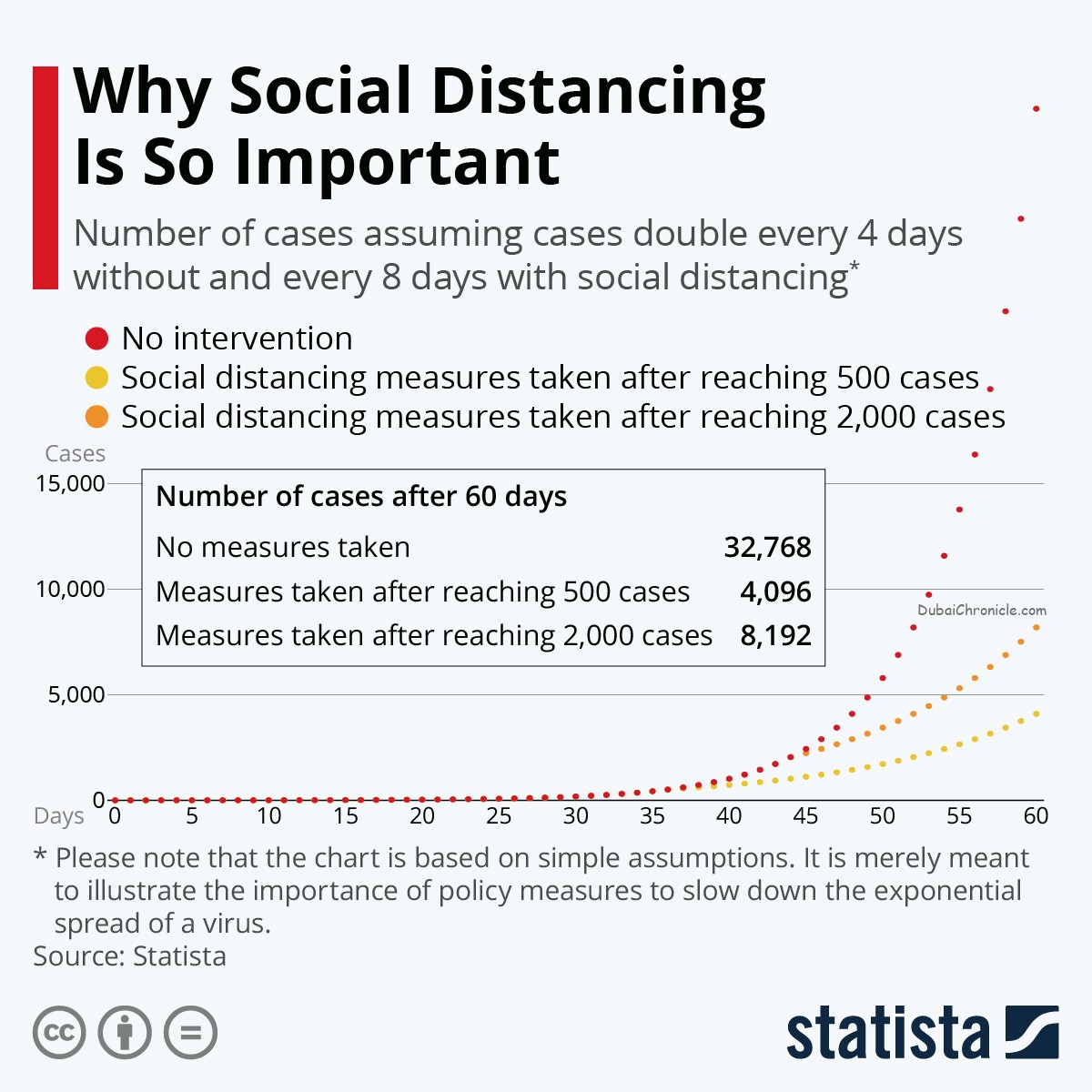 To illustrate the effectiveness of social distancing measures, let’s consider the following example. Starting off with one infected person, the virus spreads and the number of cases doubles every four days. 36 days into the outbreak, we have 512 cases and government A decides to do something. It implements social distancing measures that, for the sake of simplicity, immediately bring the doubling time from four days up to eight days. Meanwhile government B doesn’t think it’s necessary to do anything and lets the virus spread unchecked. Three and a half weeks later, 60 days into the outbreak, government A is dealing with 4,096 cases while government B is looking at more than 30,000 cases.

To further show how big of a factor time is when dealing with exponential growth, let’s bring government C in, which decides to implement the same measures as government A, only eight days later, once it has reached 2,000 cases. In this case, the measures are still highly effective, but the country still ends up with twice as many cases as country A, which simply acted quicker.