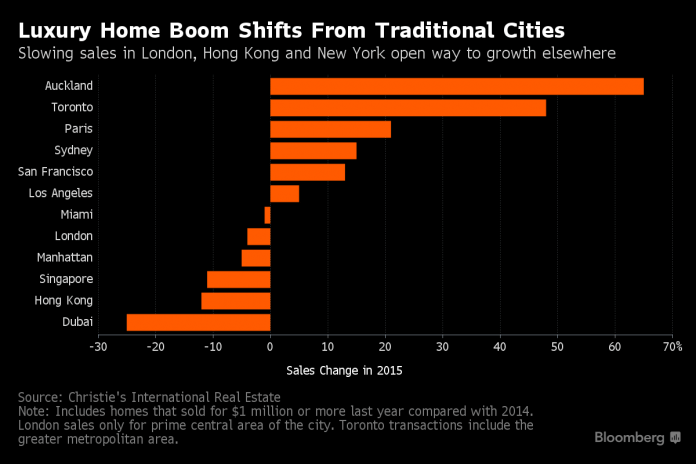 Now, more than ever, the health of local luxury real estate markets vary across the globe. Sales volumes for prime property in markets such as New York, Hong Kong, and London plateaued in late 2015 and into 2016, while emerging luxury markets continued their steady evolution. This can be attributed to a range of key contributors, from shifting financial concerns and the impact of currency flows, to the changing preferences of high-value property buyers.

These, plus many other factors related to the worldwide luxury residential market, are noted in Luxury Defined a just-released annual study by Christie’s International Real Estate, the world’s leading high-end residential real estate network. Key findings of the report include:

• While there was a slowdown in growth in some significant primary luxury markets throughout the world like New York and London, several less prominent markets which took some time to recover from the global recession perform well

• Several cities that have seen an explosion in affluent migration, new industry wealth creation, and an uptick in their general economy, particularly those that remain “affordable” compared to nearby prime markets, are experiencing incredible growth in both million-dollar-plus home sales and prices generally.

• ‘Comeback’ markets, once-stagnant luxury residential markets that are now witnessing positive turnaround, were another key element of the study. These markets are fuelled by positive economic growth – and often driven by the tech sector and similar burgeoning industries – with destinations such as Auckland, Dublin, Monterrey, and Atlanta, among others, experiencing high double-digit increases in sales.

• Exchange rates, coupled with other financial and political concerns are impacting the ebb-and-flow of the international luxury market, creating opportunities for some currency strong buyers and challenges for others.

• Despite attempts by governments to reshape top global markets and deter ultra prime property buyers in cities such as Hong Kong, many of the world’s most affluent individuals continue to turn to property as a stable asset class.

• Increased attention on the transparency of prime property markets may dissuade some legitimate privacy-sensitive buyers, but will not in the long term deter buyers as they continue to appreciate the lifestyle draws, financial benefits, and collectible appeal of luxury home ownership

• Globally, well priced trophy homes continued to command strong prices in the world’s top cities. Several markets surpassed all-time local record prices in 2015 and to date in 2016. However, the new luxury landscape has presented challenges at the highest levels as a widening disparity is growing between what buyers and sellers consider fair market value for prestige properties.