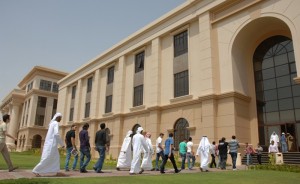 Abu Dhabi University welcomed a total of 3500 new students on both its Abu Dhabi and Al Ain campuses for the new academic year that began last Sunday. Students were enrolled into ADUâ€™s 3 Colleges, which offer 18 undergraduate programs such as Engineering, Computer Science, Business Administration, Finance, Education, Languages and other fields of study that are aligned with the needs and demands of the UAE and the region.

H.E. Ali Saeed Bin Harmal Al Dhaheri, the ADU Chairman of the Executive Board, noted that the university places great value in the recommendations and vision of H.H. Sheikh Hamdan Bin Zayed Al Nahyan, Deputy Prime Minister of the UAE and President of the ADU Board of Trustees; especially Sheikh Hamdanâ€™s insistence on the importance of offering excellent academic programs that serve ADUâ€™s strategy of growth and supports itâ€™s continuing endeavor towards international accreditation. ADU intends to establish itself as a national institute that embraces the highest standards of teaching and scientific research, while serving the needs of the UAE society. The university will also continue its efforts this year to establish the College of Medicine and Health Sciences â€“ the first of its kind in the Middle East, which will offer different programs in medicine and health care, by partnering with a prestigious German University.

Bin Harmal noted that the university has completed all preparations for the new academic year and it is geared up to welcome its students on both campuses. The university has completed full maintenance of all labs, training halls, libraries, and scientific work areas. The maintenance of labs included 74 labs and classrooms, as well as improving the condition of libraries to ensure smooth access to information for all students on campus, and which will enable them to stay in touch with the countryâ€™s and worldâ€™s most prestigious universities.

Bin Harmal pointed out that ADU has employed 55 new members, which include staff and faculty, to assume duties on both campuses for the new academic year. The number of new appointments brings ADUâ€™s total faculty compliment to a significantly increased number of 210. ADU has also completed the preparation of its on-campus Faculty and Staff accommodation, which consists out of 104 apartments equipped with a variety of services, located on the Abu Dhabi Campus in Khalifa City.

Dr. Nabil A. Ibrahim, the ADU Chancellor, noted that the universityâ€™s admission policy is based on quality, not quantity. ADU insists on creating a student centric environment during the new academic year, taking into consideration the number of student in each class and all other factors affecting the performance of the students. Dr. Nabil also highlighted the fact that the number of honor students at ADU is increasing from year to year, where the number of honored students during this year has reached 60% of the students who were admitted to the university on both its campuses â€“ a total increase of 20% from last yearâ€™s number.
It is well worth mentioning that ADUâ€™s student body consists out of 45 different nationalities, where UAE nationals make up the majority at 46%.

Abu Dhabi University was chartered as a private institution of higher learning in the year 2000 under the patronage of H.H. Sheikh Hamdan Bin Zayed Al Nahyan, Deputy Prime Minister and President of Abu Dhabi University Board of Trustees. The University is licensed by the Ministry of Education and Scientific Research with all its degree programs accredited. The University of Abu Dhabi currently serves 3000 students at its two campuses in Abu Dhabi & Al Ain. ADU moved into its new AED500m campus in Khalifa City in October 2006.Â  All programs are open to eligible students from all nationalities. The University uses the American model of higher education for its Colleges of Arts and Sciences, Business Administration, Engineering and Computer Science and English Language Institute.