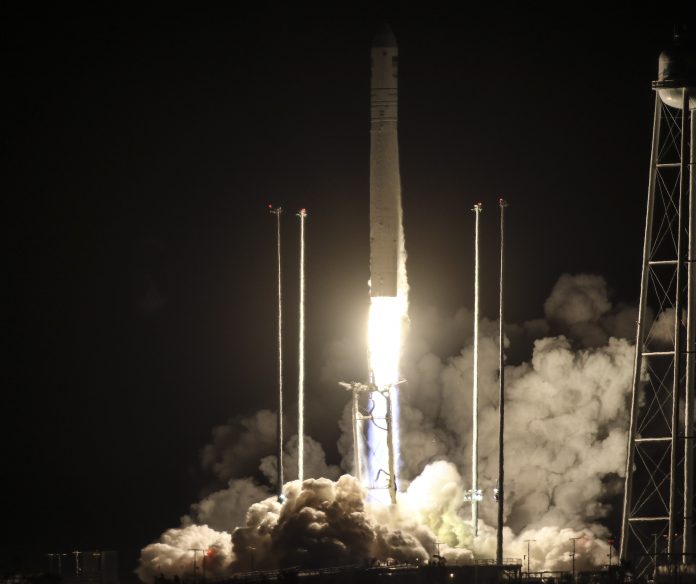 Yahsat, UAE-based global satellite operator, wholly-owned by Mubadala Investment Company, and Khalifa University of Science and Technology, a research university dedicated to the advancement of learning through the discovery and application of knowledge, and Northrop Grumman Corporation, a leading global security company, today announced the successful launch of the MYSAT-1 CubeSat to the International Space Station (ISS) on board the Northrop Grumman Cygnus spacecraft. The launch took place at the Wallops Flight Facility in Virginia, USA and was attended by a group of Khalifa University students and faculty who have participated in the development of the nanosatellite.

Developed in the Yahsat Space Lab by the students of Khalifa University of Science and Technology, the miniature satellite (also known as a CubeSat) will be used for educational and research purposes once it is deployed to its final orbit in the beginning of 2019. The nanosatellite carries two payloads, including a camera to take images of the UAE from space, demonstrating the process of remote sensing, as well as an innovative lithium-ion battery developed at Khalifa University to be tested in the extreme temperatures and radiation in space

Dr. Arif Sultan Al Hammadi, Executive Vice-President, Khalifa University of Science and Technology, said: “The successful launch of MYSAT-1, developed and built by students of Khalifa University’s Master’s Concentration in Space Systems and Technology, demonstrates that our university possesses the academic and scientific rigor required to transform the UAE’s promising students into tomorrow’s space engineers and scientists. Through our Small Satellite Program and the Master’s Concentration, Khalifa University is proud to play a critical role in the UAE’s broader space ambitions. We will continue to develop local talent that will be part of the Emirati space engineers and scientists who will contribute to the UAE’s Hope Mars Mission and the vibrancy of the country’s overall space sector.”

Muna AlMheiri, Chief Human Capital Officer at Yahsat said: “MYSAT-1’s expedition into space marks an exciting accomplishment by the students of Khalifa University. It is also a testimony to the UAE’s growing talent pool in STEM education. Yahsat is proud to have collaborated with Khalifa University and Northrop Grumman to create the first multi-disciplinary academic space programme in the UAE which has resulted in the creation and successful launch of MYSAT-1.We are committed to developing the national talent pool through providing talent with unique opportunities to enhance their capabilities and drive innovation.”

The launch of MYSAT-1 to ISS follows the rigorous testing of the nanosatellite’s engineering model for space environment conditions as well as the integration of the final launch satellite to NanoRacks’ external Cygnus CubeSat deployer. The Cygnus is an automated cargo resupply spacecraft destined for the International Space Station.

MYSAT-1 is the first Cubesat (or nanosatellite) built at the Yahsat Space Lab at Khalifa University. The laboratory was launched in 2017 at Masdar Institute in collaboration with Yahsat and Orbital ATK – part of Northrop Grumman– to develop and advance technologies within the space sector in line with the UAE’s space ambitions. It is the first space systems lab in the UAE to be equipped with Assembly Integration and Verification (AIV) facilities that cater to CubeSats of up to 6U in size (12kg 12x24x36cm) and a mass up to 10 kg. The lab also has a VHF/UHF/S-Band ground station capable of autonomous operations.

“The launch of MYSat-1 onboard the ISS-bound Cygnus is the culmination of the hard work on the part of the Khalifa University students over the past three years. Northrop Grumman is proud to have provided subject matter experts and mentors and we congratulate all the students involved in reaching this important milestone,” said Frank Culbertson, president, space systems group, Northrop Grumman.

Yahsat Space Lab, formed by Yahsat in collaboration with Northrop Grumman and Khalifa University, is one of the key players in the UAE space program initiatives. The Lab is helping to develop a national space sector characterized by high-standards so that UAE achieves competitive ranking in the world in the field of industry, technology and space research. It is also paying a defining role in STEM education as well as providing career advancement opportunities in the satellite industry of the Middle East.

The lab offers students of Khalifa University’s Master’s Concentration in Space Systems and Technology the facilities required to construct, test and launch miniature satellites called CubeSats, as part of the university’s Small Satellite Program. The high-tech and specialized facilities serve as a platform for future research in space technologies, allowing entities like the UAE Space Agency to work with the faculty on collaborative projects.