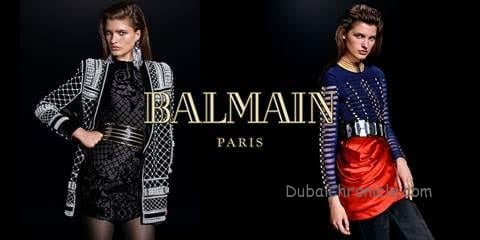 October 20th, on Wall Street in New York, the Balmain x H&M collection made its global runway debut in front of a celebrity-packed audience. Kylie Jenner, Diane Kruger, Rosie Huntington-Whiteley and Alexa Chung were among guests to get an exclusive look at the glamourous, powerful and rich detailed collection designed by Olivier Rousteing. The collection will be available in around 250 stores worldwide, as well as online, starting November 5, 2015.

The night was as bold and powerful as Rousteing’s designs, bringing together fashion and music to celebrate the collection in a venue themed like a futuristic subway station. After an exclusive preview of the campaign music video starring Kendall Jenner, dance crews hyped the crowd for a runway show featuring models such as Gigi and Bella Hadid, Jourdan Dunn, Alessandra Ambrosio, Karlie Kloss and Joan Smalls.

After the fashion show, Backstreet Boys surprised the crowd with an exclusive live performance hyping the 90´s vibe. The audience, packed with celebrities and fashion industry bigwigs, embraced the energy and celebrated the momentum of #HMBalmaination late into the night. Fans around the world were invited to follow the event through the live streaming app ‘Periscope’, while on social media the event could be followed with the hashtag #HMBalmaination.

“Tonight is a dream come true for me. The energy and vibe is unbelievable, and to have the Backstreet Boys perform for Balmain x H&M is incredible. It is an honour for me to collaborate with H&M, and tonight’s launch is something that I will never forget,” said Olivier Rousteing, creative director of Balmain.

“The launch was a true reflection of the Balmain x H&M collection, full of energy, positivity and glamour. It was a once-in-a-lifetime experience, and we can’t wait to share this feeling with our customers around the world when the collection finally hits stores,” says Ann-Sofie Johansson, creative advisor at H&M.