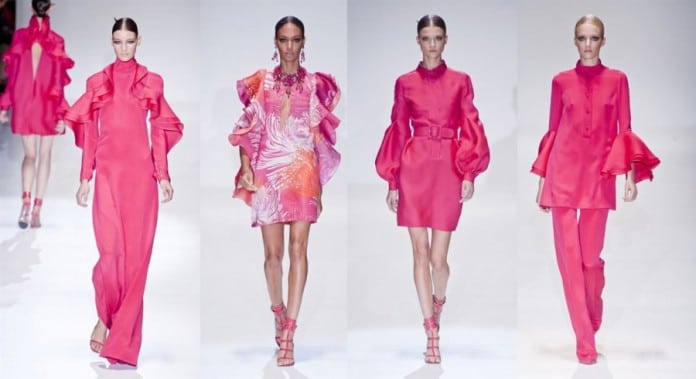 Paris Fashion Week is one of the first big events to open the fashion calendar this year. In fact, the runways in Paris show a fashion explosion since they offered two separate events for style lovers. The Trends Men’s Fashion shows opened the first edition of PFW for 2014.  Shows started on January 15th and continued until January 19th. The second group of fashion shows focuses on Haute Couture and it is still running. Like during any other fashion week, some trends were evident almost constantly on the catwalk.

Smells like the 1950s – Raf Simons presented a vision that very much reminded the 1950s. Dresses were more loose than the usual and they were covered in retro patterns that stood out with their simplicity. Sheaths were also included in the collection which further highlighted the 50s vibe.

Cold Spring and Summer: Although haute couture collections presented tendencies for the Spring/Summer 2014 season, not all of them reminded of sunshine and warmth. Part of Schiaparelli’s collection, for example, was abundant of cool colors, as well as bulky and ruffled designs.

Cold, But Romantic – Apart from the untypical spring and summer colours, the runway in Paris saw a few collections which bet mainly on pastels. Georges Hobeika, for instance, presented a romantic and fairy vision that relied on pastel pinks, purples and yellows.

Unearthly – Donatella Versace remained true to her habit to create goddess-inspired collections. The designer shared that her show was mainly inspired by Grace Jones. Even though Versace was the one to open the event, the fashion house’s collection will certainly be one of the most memorable this week. All in all, it shined with the silhouettes’ femininity, grace and a little bit of boldness.

Tweed Get an Upgrade – Tweed is always a popular part of men’s fashion shows. However, this time we were surprised to see that they came with a nice twist. The colours were darker which resulted in more versatility. In addition, the silhouettes were trimmer which was also a good change.

Blankets – This was one of the strangest trends that was constantly appearing on the runways during the Trends in Men’s Fashion event at the Paris Fashion Week. In most of the cases, designers tried to use blankets as a fashion statements. Although models looked cozy and comfy in them, they are not likely to step off the runway.

Sneakers are Back – Well, sneakers have never really lost their luster. However, over the past couple of years dress shoes tried to steal their limelight. Nevertheless, that is about to change. Designers showed off very interesting designs which were far from sporty.

Hip-Hop Also Makes a Big Comeback – It may be because Kanye West introduced his new collection, but the hip-hop vibe this year was bigger than ever. Although collections did not have a traditional street look, they did reminded of rebelliousness. Pants were not as saggy as they used to be, but there were a lot of dark-coloured parkas.

The Rock & Roll Opposition – Another great influence on the runway was the rock & roll style. However, it spoke more of grunge and underground fashion and it had some punk influence too. Some of the collections which followed this trend, Saint Laurent and Junya Watanabe looked as if they have came out of an old punk-inspired movie.

It is easy to see that this edition of Paris Fashion Week offered great diversity in both men’s and women’s fashion. Even though there were some well-known trends, designers offered a new angle of them.