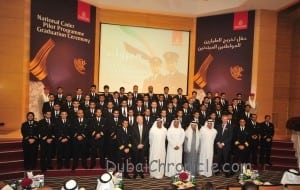 At a ceremony overseen by His Highness Sheikh Ahmed bin Saeed Al Maktoum, Chairman and Chief Executive of Emirates Airline and Group, Emirates held a graduation ceremony of the largest group of cadet pilots in the history of the Emirates National Cadet Pilot Programme. The 54 UAE National men and woman have earned the qualification of professional pilots after completing 30 months of theoretical study and practical training.

“With the continued guidance from His Highness Sheikh Mohammed bin Rashid Al Maktoum, UAE Vice President and Prime Minister and Ruler of Dubai, to invest in the development of Emiratis across all divisions of the Emirates Group, the percentage of citizens in the ranks of senior management has grown to 25 percent. Likewise, since its inception in 1992, the National Cadet Pilot Programme has now increased to a total of 426 Captains, First Officers and Cadets in training,” said His Highness Sheikh Ahmed bin Saeed Al Maktoum. “We are confident that this latest class of graduates will contribute to shaping the future of Emirates;’ playing a key role servicing of our ever-expanding network of destinations covering six continents. Today’s graduates contribute not only to the success of Emirates but also to the success of the United Arab Emirates and I am honoured to recognise these model citizens.

His Highness presented the graduation certificates and awards at the ceremony, which was attended by a number of senior officials from the Emirate Group as well as the family and friends of the graduates. Special thanks were made to His Highness Sheikh Ahmed bin Saeed Al Maktoum for his unlimited support and personal follow-up with the Cadets, as well as to all the departments of the Emirates Group, the UAE armed forces, the General Civil Aviation Authority, the Civil Aviation Authority, and Dubai World Central Airport’s Dubai Aviation City for their consultation into the establishment the Emirates Aviation Academy. flydubai, led by Ghaith Al Ghaith, was also recognised for their support of the Emirates pilot training programme.

“We flourish under the guidance and support of His Highness Sheikh Ahmed bin Saeed Al Maktoum and Emirates is committed to attracting and developing Emiratis in order to lead the rapid growth of the airline,” said Captain Abdullah Al Hammadi, Emirates Nation Cadet Pilot Manager. “Where we today serve 132 destinations around the world with 200 aircraft, Emirates growth will continue this year with the addition of an additional 35 new aircraft and several new destinations. Adding to that, with the need in our region for more than 36,000 pilots from now until the year 2030, Emirates will meet this need through the new Emirates Flight Academy. The Academy will open next year at Dubai World Central Airport and will lead the way for professional pilot training in the region.”

The recently announced Emirates Flight Academy will provide future cadets pilots with complete immersion in aviation from the first day of joining until the day of graduation. The state-of-the-art facility, a 500 million AED investment, will accommodate 400 pilots training at one time and graduates will leave with skills and license to meet the requirements of international airlines. The increasing number of graduates from the Emirates National Cadet programme illustrates its growing success and how Emirates attracts more UAE Nationals to the role of pilot each year.

The Emirates National Cadet Pilot programme consists of three phases; beginning with courses in Intensive English and Aviation Studies in Dubai, then moves participants to flight training in either Spain or the United Kingdom to achieve a commercial pilot license before completion of six month of studies on flight simulators at the Emirates Training College in Dubai.