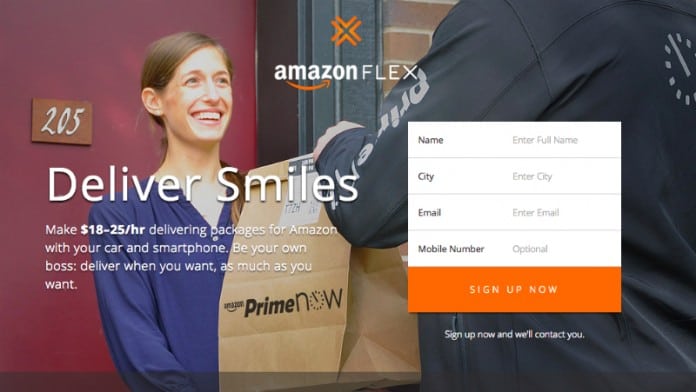 If you are on the lookout for an extra income in your free time, either making extra use of your vehicle or developing apps for retailers and service providers, here is an inspirational example!

The largest online retailer Amazon.com has introduced an innovative service named Amazon Flex. It doesn’t take much to figure out how it works and it is not a pick-it-up-yourself service. It is ultimately an Uber-like service that has on-demand contractors delivering your Prime Now orders. If you are not an online shopper veteran, you should know that this is a fast grocery delivery service that Amazon offers in the US.

So, how Amazon Flex fits in? Like with ridesharing, couriers have to bring their own car and install an app on their phone that notifies them of gigs — the difference, of course, is that they’re transporting packages instead of people. Recruits in the US can make between $18 to $25 per hour, and they can work as much as they want.

It is just a matter of time the idea to be utilized by other online retailers around the world. In the same way Uber’s adoption spreaded, online shopping deliveries can become faster than ever in not that distant future.

The innovative service is only available in Seattle right now, but Amazon is planning to expand it to several more areas (including Austin, Chicago, Manhattan and Portland) in the future. It may also begin covering less-than-urgent packages, too, which suggests that Amazon sees this as a more than just a way to make its high-speed shipping dreams a reality. In the future, Flex could help Amazon cope with crushing holiday demand and other situations where conventional services aren’t up to the job.

But crushing holiday demand is an obstacle not only for Amazon, but for numerous well developed by now online retailers in various parts of the world. In places like Dubai where taxes are not yet implemented, and there are no limitin