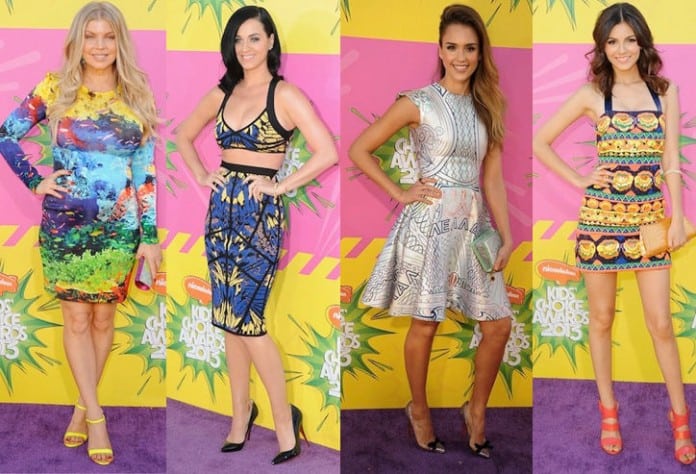 Certainly, the Teen Choice Awards is an event that we can’t call sophisticated. Still, among the bright, cocktail looks and fun outfits of all the hottest teen idols, style watchers have seen some fashion trends that definitely deserve a highlight! Who won and who lost on the red carpet, or shall we say, on the blue carpet?

Although there were no ball gowns, many of our favourite, young, Hollywood celebrities looked absolutely gorgeous on the turquoise carped, showing off legs, bums and sleek figures in bebe and Karen Millen like outfits. Some chose funny cropped tops, surf theme-matching palm prints, butterfly or lips elements, while others opted for classy and super-chic outfits. Surely, those who stayed glued to the TVs saw not only the amazing performances of artists like Demi Lovato and One Direction, but also their inspiration for their own fashion choices – well at least until some new video gets viral, which is probably going to be two or three weeks.

However, when we speak of fashion choices, we should start with the big winner, but not in terms of surfboard trophies. As if showing the world what her ex, Biebs, misses, Selena Gomez appeared in a gorgeous forest-green gown in which she looked absolutely stunning! The simple, chick dress definitely showed off her legs (and not only) in a very elegant way. Co-host and Pretty Little Liars star Lucy Hale also arrived at Teen Choice Awards in a classy outfit – her white two-part Houghton perfectly matched those magnificent opened-toed shoes! And of course, everyone felt in love with Cher Lloyd’s new hairstyle – short, choppy and elegantly curled instead of the usual extensions (which are definitely not so hot any more). The 20-year-old singer opted for gold and black striped top, revealing her tummy, and a matching high-waist skirt.

Well, it looks like some of the young celebs are trying to get a new, maybe more mature look, and it certainly goes great for them, while others arrived on the blue carped and, not to our surprise, failed again. Everybody knew Miley Cyrus would show some flesh, but she also managed to become an example of what NOT to wear – never! Mini black skirt, black bra (Saint Lauren if that matters), and a lot of visible tan lines on her back which were pretty clear through her sheer black shirt! Well, Miley, it looks that eye-catching outfit simply shows your recent lack of fashion taste. Apparently, Bella Thorn and Lily Collins had decided their palm tree prints would win them awards! Comedy actress Rebel Wilson appeared as a super heroine with big muscles, or simply as a supersized heroine. Well, at least she stayed true to her hilarious image from the big screen, for which we just can’t hate her!