Social networking has spread around the world with remarkable speed, shows a Pew Research Center’s survey report. In most of the developed countries such as Britain and  the United States, about half of all adults now use Facebook and similar social networking platforms. Population of many lower-income nations with access to the internet, also turns to the social websites.

Cell phones and smartphones continue gaining popularity throughout much of the world. Roughly half of the population in Britain, the U.S., and Japan have a smartphone. According to the report, most smartphone users visit social networking sites on their phone, while many get job, consumer, and political information.

Technologies like these are especially popular among the young and well educated people under age 30. Those with a college education are more likely to engage in social networking and to use a smartphone.

The 21-nation survey conducted by the Pew Research Center’s Global Attitudes Project also finds that global publics are sharing their views online about a variety of topics, especially popular culture.

A median of 67% of social network websites users share opinions about music and movies. Significant numbers also post their views on community issues, sports and politics. Fewer give their opinions about religion. 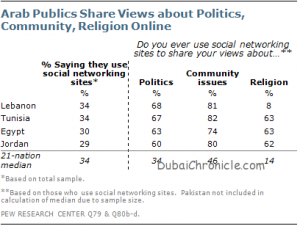 In the Arab world, expressing opinions about politics and community issues is particularly common, according to the survey. For instance, in Egypt and Tunisia, two nations at the heart of the Arab Spring, more than six-in-ten social networkers share their views about politics online. In contrast, across 20 of the nations surveyed, a median of only 34% post their political opinions.

Similarly, in Egypt, Tunisia, Lebanon and Jordan, more than seven-in-ten share views on community issues, compared with a cross-national median of just 46%.

Results for the survey are based on telephone and face-to-face interviews conducted under the direction of Princeton Survey Research Associates International. For further details please visit the website.