However, a major shift in the global economic sentiment late Tuesday helped dash the yellow metal and send it into a harsh correction to a low of $1704.25 as it marked the biggest decline in gold since 1980. 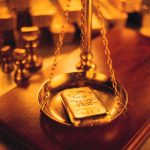 However, sentiment again turned on a pin to post a hammer candle pattern on the daily chart as risk appetite decreased in the run up to the speech from Ben Bernanke in the U.S. Spot gold closed around $1822.75 oz on Friday, on the high side of the day‘s $1758.03 to $1826.00 range.

The recent sell-off reflected some scaling back of QE3 expectations and suggests that gold‘s reaction to potential disappointment last week may be less severe, according to the UBS adisory. The fragility of investor sentiment toward gold at the moment and the quick bounce back could mean that gold will suffer further losses, minor or significant.

The daily volume action is telling a different story than the intermediate and long term volume indicators are projecting. With the price advance starting two weeks ago the volume has been pretty low. The advance on Thursday and Friday was also on decreasing volume.