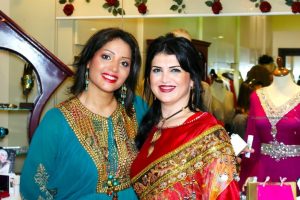 Dubai Investment Properties, one of the leading real estate developers in UAE, today announced that Kubra Al Qaseer has launched a new fashion line at its store at the Palm Strip Shopping Mall in Jumeirah. In addition to promoting Kubra’s fashion collection, the store, which is owned and managed by Nehad al Halwachi, also plans to provide both local and regional designers a platform to stock and sell their creativity.

Speaking at the launch, Nehad al Halwachi, owner of the store, said, “Our store – Kubra Al Qaseer, which is named after the famous Bahraini designer herself, is synonymous with elaborately embellished Jalabiyas and Kaftans for both the expat and Emirati women. Our new line of jalabiyas are colourful, flowing and made in 100% silk and can be dressed up or down to suit any occasion. We are confident our customers will love our new fashion collection.”

The unique feature of the fashion at Kubra Al Qasser is that, every quarter there will be a host of new talent displaying their creativity. Not only does this add freshness to the collection but at the same time it also provides shoppers an unrivalled opportunity to see new emerging talent as well as a vast variety of outfits from different talent from around the region and UAE. Furthermore, Nehad, has taken this one step forward by also introducing a range of designs from expatriate designers whom are influenced by Middle Eastern fashion.

“We saw that there was a niche that needed to be filled and with the plethora of emerging talent from this region, we wanted to give these talented fashion designers a launch pad to showcase their creativity. Hence we have decided to offer them a stage to showcase their talent and creativity and in turn reach new heights of success,” Ms. Al Halwachi added.

“We are happy that Kubra Al Qasser has chosen to encourage local designers at their store. Kubra Al Qasser’s collection was already popular with customers visiting Palm Strip, which has been a preferred destination for Middle East fashion brands. We are confident Nehada’s new initiative at the store will also add value to our mall,” said Mr. Deepak Chawla, Operations Manager at Dubai Investment Properties.