NBAD is the second largest bank in the United Arab Emirates by assets, which is 70.5 percent owned by Abu Dhabi’s government. According the prospectus, the notes may be issued in any currency and any maturity of at least one month. The purpose of the programme is not yet specified.

NBAD officials were not immediately available for comment, according Reuters.

Barclays Capital is the arranger for the programme, the prospectus showed.

NBAD already sold a five-year benchmark bond worth $750 million in March in the first debt issue from the UAE since Dubai’s November debt crisis. The lender has made several issuances under its $5 billion EMTN programme since December 2005 with maturities ranging between 2010 and 2019. The outstanding amount from this programme stood at 12.2 billion dirhams ($3.32 billion) at the end of March, the prospectus showed. NBAD has outstanding bonds totalling $4.1 billion, Reuters data show. NBAD, rated ‘A plus’ by Standard & Poor’s and ‘Aa3’ by Moody’s, is exposed to debt-ridden Dubai World units Fitch assigned the bank with the ‘AA minus’ rating. The cost of insuring five-year NBAD debt (CDS) stood at 162 basis points, above 108 points for the emirate of Abu Dhabi. 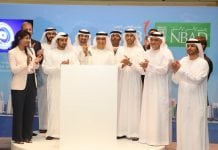 Mutual Funds of ADCB and NBAD at its lowest