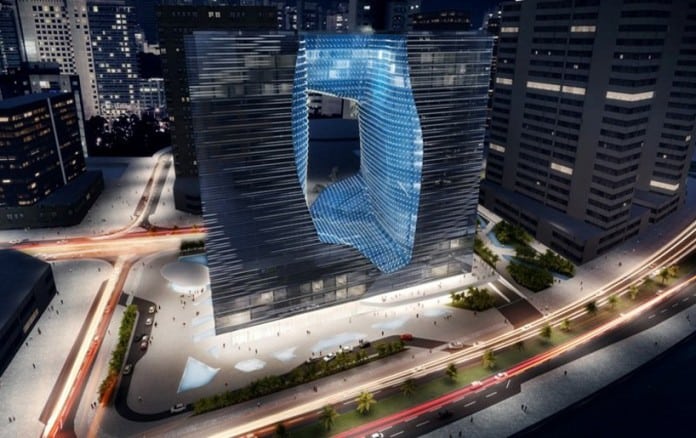 Cityscape Global 2013 started yesterday in Dubai. Already many announcements about construction projects re-launches are out. Among them is the presentation of a new version of The Opus. The project comprises of serviced apartments and it was designed by Dame Zaha Hadid. In addition, the development will feature a new luxury hotel with Michelin star restaurants.

Due to the building’s interesting design, it is expected that The Opus will become one of Dubai’s iconic landmarks. However, that will not happen at least until 2016, when construction is scheduled to begin. According to the developers behind the project, about 30% of it is completed.

Despite the promising prognosis, it is also true that many of Hadid’s projects in Dubai (and in other cities around the world) are yet to be completed. The Opus is just one of Hadid’s many projects in a process of development. The famous architect is behind a number of projects in Dubai, which still have not been built. Those include Signature Towers, Dubai Financial Market and Dubai Opera House. Although all of them were initiated around 2006 and 2007, they are still not completed.

However, this is not actually unusual for Hadid’s designs. The main reason is that the architect’s projects are always futuristic and hard to build. In addition, they often require more refined materials which cost extra money and they take more time to find. Even a the smallest compromise on the materials’ quality may affect the building’s structures and design. For instance, the materials used for Hadid’s Guangzhou Opera House, as well as the complexity of the design of the building, quickly resulted in cracks and gaps on the building.

Also, inspiring designs are not always practical. Such was the case with the architect’s London Orbit tower which become popular during the 2012 Olympics. The seating arrangements in the building did not offer good views to all attendees. As you can imagine, this is a serious problem in such cases.

Because of these reasons, investors may shy away from Zaha Hadid’s pricey vision. Although creative and unique, her deigns take a lot of time to complete. Many of them are even currently on hold. Such is the case with the highly advertised Nuragic and Contemporary art museum in Cagliari, Italy. The project started in 2007, but it is far from being finished.

One Woman in a Man’s World

Nevertheless, Zaha Hadid has made a name in a field occupied mainly by men. Hadid is famous as the first woman to win the Pritzker Prize for Architecture, which is the equivalent of Nobel Prize for architecture.

During the last few years, Zaha Hadid’s popularity, like her buildings, reached new heights. However, her success didn’t happen overnight. For many years, she struggled to find her place in the business and to attract clients have vision that is similar to hers. A few of her biggest projects, like The Peak in Hong Kong or the art and media center in Dusseldorf, were never built. That was because investors considered the buildings too unconventional, expensive and ambitious.

Today, however, buildings designed by Hadid could be seen all over the world – from Europe and Asia to the Middle East. Two of her most famous projects are the Rosenthal Center for Contemporary Art in Cincinnati and the Cardiff Bay Opera House. They distinguish with their unique and innovative architectural style. Zaha Hadid is also the critics’ favourite who often refer to her as a “diva.”

Zaha Hadid’s style can be defined as baroque modernism. She doesn’t stick to the classical architectural conceptions. Quite the opposite, she challenges and shatters them. Her artistic vision knows no boundaries and limits. Zaha Hadid doesn’t comply with the set rules for space. She experiments with it by creating walls, ceilings and angles which do not conform to architectural traditions. Hadid’s buildings are fluid, but at the same time chaotic too. That is achieved through her unique understanding and use of fragmented geometry. Her buildings look astonishingly modern, as if they have been snatched from the future or from some sci-fi movie.

Despite specializing in more futuristic projects, Zaha Hadid prefers to express and showcase her work not in the form of architectural drawings, but in paintings. According to the architect herself, only paintings can convey her unusual and innovative ideas.

Cityscape Global 2013 will continue until October 10.