The Dubai Ice Skating Sport Academy “Queen of the Ice World” (QIW) is pleased to announce The 2012 Golden Cup of Dubai Figure Skating Championship. The event takes place in Al Nasr Leisureland ice rink from the 28-29 April 2012, when more than 100 elite international skaters from more than 10 countries will descend on the city. Skaters will compete in Girls, Boys, and Artistic disciplines. Throughout the event, guests will meet with the legend of figure skating industry, Alexey Mishin! 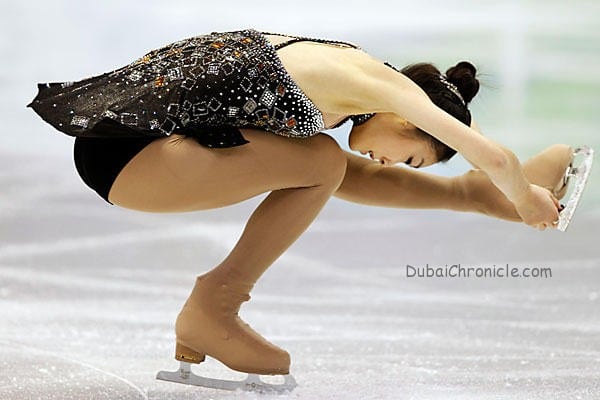 Starting April 28th at 9:00 a.m., over 100 competitors will descend on Al Nasr Leisureland ice rink, Dubai, the United Arab Emirates to compete in many different categories over the course of two days. The 2012 Golden Cup of Dubai Figure Skating Championship is hosted by “Queen of the Ice World” (QIW) and draws skaters from Europe, Russia, Kazakhstan, Armenia, and many other countries. The Championship includes the best junior skaters in the Middle East, Naya Yusuf and Amira Abdul Moati, both represent UAE and compete for Dubai.

The event supports Dubai Sport Tourism innovative program, giving great concern and exerted efforts to the healthy lifestyle, amusement and new discovery of the UAE among tourists. All skaters and more than 200 guests will join the championship of ice skating, autographs, photos, and meeting with elite international skaters and top professional ice skating coaches from Russia, Kristina Kozlova and Marina Statinova.

The 2012 Golden Cup of Dubai Figure Skating Championship, which is open to the public, offers competitive events for girls and boys from the age 3 to 18 years old. There will be international level judges who will be judging under the same scoring system as is used in the Olympics for the highest level skaters.

The 2012 Golden Cup of Dubai Figure Skating Championship is a great way to get a preview of the up-and-coming skating talent in the UAE and Middle East region. Many of the event’s participants went to other International Junior Competitions as well. For more information about the competition please see the website at: www.queenoficeworld.org

“Queen of the Ice World” is a professional Ice Skating School in Dubai, UAE. The School is in direct connections with people who are professionally following ice figure skating around the world.

“Queen of the Ice World”(QIW) is founded in 2007, by Christina Atzurra with an international master-rated coach with over 25 years experience, to provide a formalized training center for figure skaters, offering a positive and challenging skating environment for both the active recreational skater who wishes to progress up the test ladder of ISU, as well as for the competitive figure skater who wishes to test, compete and excel under International Skating Union (ISU) structure (www.isu.org).

QIW operates the Learn to Skate School at Al Nasr Leisureland Club & Dubai Mall Ice Rink which offers group classes 7 days per week during the winter sessions, as well as a Summer Learn to skate program that starts in beginning of June till end of August. These classes are open to prospective skaters as young as age 3. The Learn to Skate School offers classes at different levels ranging from the tot skater who is taking their first steps on the ice and progresses to classes offered to skaters who have already been in the Learn to Skate school for a couple years. The School also has classes geared toward older students and adults who want to learn how to skate.

In addition, QIW offers an extensive off-ice training schedule that varies depending on the season of the year, including off-ice fitness, mental edges, off-ice jumping, ballet and choreography as well as a summer skating training program between early June and late August. This summer program, which we call Summer Camp, is an intensive figure skating training program geared toward both ISU test and competitive track skaters who wish to excel.

QIW offers group lessons for children and adults of ALL ages. During the school year winter sessions are offered with classes held on Friday & Saturday from mornings till afternoon, during the week from afternoons till late evening – depending on skating level.

The top quality of the coaching staff offers all participants the ideal chance to improve their skating skills. We have all aspects of learning of Figure Skating on ice: Jumps, Spins, Spirals, Steps and Step Sequences, and Choreography as well.