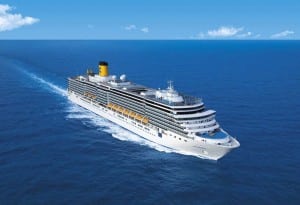 Ship cruises brought in 26,580 tourists to Dubai from April 6 to June 14, 2010 according to recent statistics released by the Dubai Department of Tourism and Commerce Marketing (DTCM), driving the sustained growth of the emirate’s tourism sector.

The guests were received by the Dubai Cruise Terminal operated by DTCM at Port Rashid. The cruise terminal serviced 17 ships belonging to cruise companies from all over the world.

DTCM officials overseeing Dubai’s marine tourism note that the terminal is witnessing a significant increase in the number of passengers travelling by sea via major cruise ships. They explained that the world-class services of such ships are attracting more seafarers.

Among the cruise lines that contributed significantly to the increase in cruise trips to the emirate during the three-month stretch are the Silver Whisper with 227 passengers; the Seabourn Odyssey with 293; Brilliance of the Seas with 4,287; AIDA Diva with 2,438; Costa Luminosa with 2,175; Ocean Princess with 524; Spirit of Oceanus with 71; and Crystal Symphony with 372 passengers.

Costa Deliziosa, meanwhile, carried 10,358 travellers in five trips. Ships that visited Dubai during the latter part of the period included The World with 56 passengers; Azamara Quest with 667; C Columbus with 254; Queen Victoria with 1,823; Albatross with 605 passengers, and Dawn Princess which transported 1,875 travellers in June 2010. Although some tourists travelled back to their respective countries by plane, others took their place on the ships’ return trips.

The first quarter of 2010 saw a strong influx of Bahraini tourists to Dubai after the recent opening of the new Dubai Cruise Terminal, which can accommodate four ships at a time. DTCM also revealed that Costa Cruises recently opened its representative office in Dubai. Costa Luminosa made 18 calls with a total of 118,314 passengers between December 10, 2009 and April 12, 2010, while Costa Deliziosa made 10 calls with 65,730 passengers between February 23 and May 11, 2010.

The new Dubai Cruise Terminal, which spans an area of 3,450 square metres, is one of the key factors that has influenced the growing popularity of Dubai as a cruise destination. The terminal features facilities like money exchange, ATM machine, post office outlet, duty free shop, souvenir shops, Wi-Fi business centre with free internet access and VIP Majlis.