Are you feeling cold, constipated, and depressed?  You might have under-active Thyroid Gland (Hypothyroidism)! 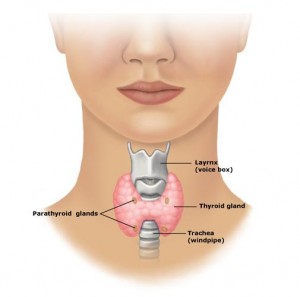 The thyroid gland is a butterfly-shaped endocrine gland in the lower half of the neck, located below the larynx (voice box) and above the clavicles (collarbones).

The thyroid gland produces two hormones, triidodothyronine (T3) and thyroxine (T4), which regulate how the body uses and stores energy (also known as the body’s metabolism). Thyroid function is controlled by a gland in the brain, known as the pituitary gland.

The pituitary produces thyroid stimulating hormone (TSH), which stimulates the thyroid to produce T3 and T4.
Hypothyroidism is a condition in which the thyroid gland does not produce enough thyroid hormone. Another term is an â€œunderactive thyroid.â€Â  It is the most common thyroid disorder.

In about 95% of cases, hypothyroidism is due to a problem in the thyroid gland itself and is called primary hypothyroidism. In adults, Hashimotoâ€™s disease is the most common cause of hypothyroidism. This is a condition in which your immune system produces some antibodies that attack your thyroid gland, causing inflammation and fibrosis (scar tissue). Subsequently, the thyroid is damaged and canâ€™t make enough hormones. Certain medications and diseases can also decrease thyroid function.

Hypothyroidism can also be caused by treatment with radioactive iodine or surgery on the thyroid gland (which are used to treat other types of thyroid disorders).
A problem with the pituitary gland is another rare cause.

Hypothyroidism can also be present from birth if the thyroid gland does not develop properly.
It occurs more often in women, it increases with age, and it runs in families.

The extent of symptoms depends on the severity of the hormone deficiency and the speed with which the deficiency developed. Usually, symptoms are milder when hypothyroidism develops gradually. Many people who are hypothyroid only have one or two of these symptoms.

Respiratory system â€”Â Hypothyroidism weakens the respiratory muscles and decreases lung function. Symptoms can include fatigue, shortness of breath on exertion, and decreased ability to exercise. Hypothyroidism can also lead to swelling of the tongue, hoarse voice, and sleep apnea. Sleep apnea is a condition in which there is intermittent blockage of the airway while sleeping, causing interrupted sleep and daytime sleepiness. 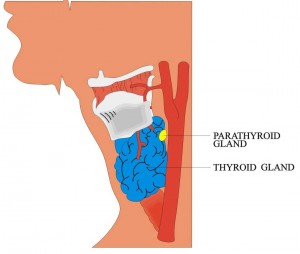 Why care about hypothyroidism?

Hypothyroidism slows the heart rate and weakens the heart’s contractions, decreasing its overall function. Related symptoms may include fatigue and shortness of breath with exercise. These symptoms may be more severe in people who also have heart disease. In addition, hypothyroidism can cause mild high blood pressure and raise blood levels of the â€œbadâ€ cholesterol.
Also, a life-threatening condition called myxedema coma can develop with severe untreated hypothyroidism, which causes loss of consciousness and hypothermia (low body temperature).
Untreated hypothyroidism can lead to poor mental and physical performance.
Diagnosis of hypothyroidism is especially important in pregnancy to ensure delivery of a healthy baby. Routine testing of all babies at birth identifies those with hypothyroidism. If not treated, a child could have mental slowness, retardation, or fail to grow normally.

DIAGNOSIS â€”Â In the past, hypothyroidism was not diagnosed until symptoms had been present for a long time. However, simple blood tests can now detect hypothyroidism at an early stage. A person may be tested for hypothyroidism if there are signs and symptoms, such as those discussed above, or as a screening test.

Blood tests â€”Â Blood tests can confirm the diagnosis and pinpoint the underlying cause of thyroid hormone deficiency. The most common blood test for hypothyroidism is TSH (thyroid stimulating hormone). TSH is the most sensitive test since it may be elevated even with small decreases in thyroid function. Thyroxine (T4), the main product of the thyroid gland, may also be measured to confirm and assess the degree of hypothyroidism.
When the cause of hypothyroidism is Hashimotoâ€™s disease, anti-thyroid antibodies that attack the thyroid can also be measured in the bloodstream.

Hypothyroidism is common in elderly women, affecting up to 15% of women over the age of 70 years.
TREATMENTÂ â€”Â The goal of treatment for hypothyroidism is to return blood levels of TSH and T4 to the normal range and to alleviate symptoms.

Medication â€”Â The treatment for hypothyroidism is thyroid hormone replacement therapy. This is usually given as an oral form of T4 (levothyroxine). Generic and brand-name formulations are equally effective. However, it is preferable to stay on the same type of T4 rather than switching between different brands. If a switch is necessary, a blood test is usually done six weeks later to determine if the dose needs to be adjusted. Color-coded tablets can help with dose adjustments. T4 should be taken once per day on an empty stomach (1 hour before eating or two hours after).
Some clinicians prescribe another form of thyroid hormone, triiodothyronine (T3) in combination with T4. However, since T4 is converted into T3 in other organs, the majority of studies have not shown advantages of combination T3 and T4 therapy over T4 alone.
In most cases, symptoms of hypothyroidism begin to improve within two weeks of starting thyroid replacement therapy. However, people with more severe symptoms may require several months of treatment before they fully recover.

Duration and dosage â€”Â Most people with hypothyroidism require lifelong treatment, although the dose of T4 may need to be adjusted. A provider will prescribe an initial dose of T4 and then retest the blood level of TSH after six weeks. The T4 dose can be adjusted at that time, depending upon these results. This process may be repeated several times before hormone levels become normal. After the optimal dose is identified, a provider may recommend monitoring blood tests once yearly, or more often as needed.

Never increase or decrease the T4 dose without first consulting a healthcare provider. Over time, doses of thyroid hormone that are too high can cause mild hyperthyroidism, with the associated dangers of atrial fibrillation (fast and irregular heart beats) and accelerated bone loss (osteoporosis).

Dose changes â€”Â Changes in the T4 dose are based upon the person’s TSH and T4 level. The dose may need to be increased if thyroid disease worsens, during pregnancy, if gastrointestinal conditions impair T4 absorption, or if the person gains weight. Many drugs and food products (i.e. high fiber diet, soy products, calcium, iron, multivitamins, and antacids) can interfere with the absorption of T4 and should be taken at a different time of the day.
The dose may need to be decreased as the person gets older, after childbirth, or if the person loses weight.

Monitoring â€”Â Individual T4 doses can vary widely and depend upon a variety of factors, including the underlying cause of hypothyroidism. People with certain conditions require more frequent monitoring.

Pregnancy â€”Â Women often need higher doses of T4 during pregnancy. Testing is usually recommended every four weeks, beginning after conception. Once the optimal T4 dose is established, testing is usually repeated at least once per trimester. After delivery, the woman’s dose of T4 will need to be adjusted again. 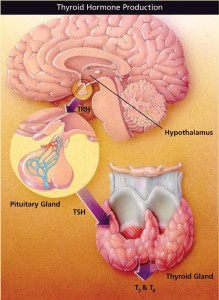 What should you do with this information?

If you have hypothyroidism, you need treatment. Otherwise, it could become a serious health problem.
If you have one or more of the symptoms of hypothyroidism, or if thyroid disease runs in your family, you should ask your doctor for a blood test. If the test is positive, you should tell your blood relatives about your condition. They too should have tests for thyroid disease.
Some experts also recommend checking thyroid function in early pregnancy and in all women over the age of 60, even if they donâ€™t have symptoms. 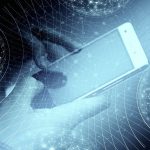 February 24, 2020
The global shift towards a cashless society presents a huge opportunity for mobile wallets, with millions of people using this payment method. Mobile wallets...