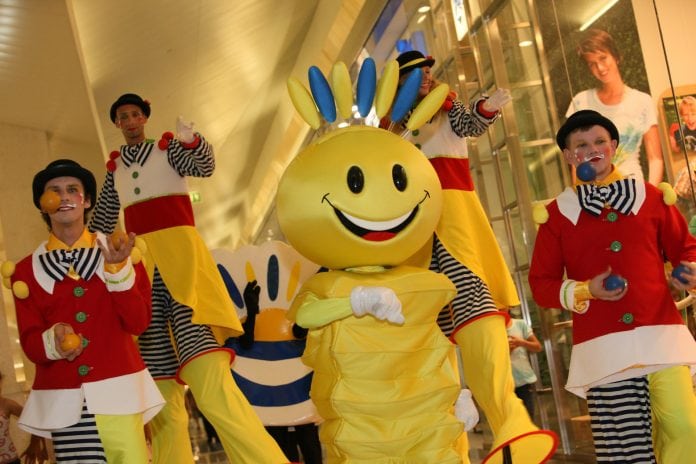 Dubai Summer Surprises (DSS) is offering plenty of ways to keep everyone entertained this weekend through events and promotions taking part across the city. Here are the best activities for people to enjoy this coming weekend in Dubai, including star singers, comedy nights and a final opportunity to be crowned the longest goal-scorer.

A chance to win 1kg of gold at City Centre Deira
Shoppers who spend over AED 200 at any retailer in Deira City Centre until 4th August will be in for a chance to walk away with 1kg of gold. Lucky fashionistas will also get a chance to win free tickets to Vox Cinemas when buying from retail brands and families who dine in one of the F&B outlets will get free cards to Magic Planet.

Nassif Zeytoun Concert
Syrian singing sensation Nassif Zeytoun will be wowing the crowds at Dragon Mart 2 on 13 July. Taking to the stage at 7.30pm, the winner of the Arabic reality television show Star Academy will perform his most popular songs, including “Mesh Aam Tezbat Maae” released in 2014.

Win Instant Prizes at Majid Al Futtaim Malls
For the first time in DSS history, DFRE and Majid Al Futtaim have partnered to create a unique opportunity for shoppers to win instant prizes. Tourists and residents who spend AED 300 or more at Mall of the Emirates, City Centre Deira or City Centre Mirdif are in for a chance to be amongst 5 winners daily to spin the wheel and win cash prizes between AED 2,500 to AED 100,000. One grand prize winner will spin the wheel from 8 to 28 July to win from AED 100,000 to AED 3 million.

Modhesh World
The family fun continues at Modhesh World at Dubai World Trade Centre where the air-conditioned halls are packed with interactive experiences across different zones: Show Land, Amusement Park, Jam Base, and Modhesh Bazaar. Kids can enjoy big stage entertainment and delicious food and beverage outlets for snacking and dining moments at Show Land, while the Modhesh Bazaar is retail central with lots of shopping and indoor market action on offer.

Live Characters at Dubai Mall
Children will get to meet their favourite characters from IMG World of Adventure at the stage in Dubai Mall. The characters will appear every 40 minutes from 4pm to 10pm daily with Characters like Iron Man, Thor, Spider Man, Black Widow (Marvel), Ben10 (Cartoon Network) and Dinosaurs (Lost Valley).

PAW Patrol Live Show
Running from the 12th to the 19th of July at Mall of the Emirates, PAW Patrol is an engaging, action-adventure preschool live show starring a pack of six heroic puppies led by a tech-savvy 10-year-old boy named Ryder. With a unique blend of problem-solving skills, cool vehicles and physical humor, the PAW Patrol works together on high-stakes rescue missions to protect the Adventure Bay community. Kids can catch the PAW Patrol show at the South Galleria in Mall of the Emirates.

Summer of Laughter
The Laughter Factory, the Middle East’s longest running comedy night, will be hitting Dubai’s hotels this summer with its ‘Summer of Laughter’ tour from June to September. This weekend, Nick Beaton will be bringing his unique brand of laughter to the Movenpick Hotel in JBR with two shows on the 12th and 13th of July at 9pm.

Football Fever
Hurry up and enjoy the last chance of taking a shot at the longest goal ever at Deira City Center’s Football Fever activation. With the FIFA World Cup reaching its final stages, football fans can take part in this activity by only spending AED 300 at the mall.

Talents Festival at Children’s City
Children’s City at Creek Gate provides loads of education, entertainment and fun throughout the summer period. From the 15th to the 28th July, Children’s City will be hosting and exiting talent festival showcasing remarkable talent.

With plenty in-store this summer, people are encouraged to check out the website