This weekend in Dubai, as every other weekend, there are many events and entertainment shows. But let’s face it – a lot of people would stay at home rather than getting out and having fun. Yes, it spares you the unbearable heat and a good amount of cash, perhaps, but such choice is incredibly boring, even depressing, and it may make you sick and contributes to overweight problems.

Instead, why don’t you have a look at the short list of events planned for this weekend in Dubai below? It has a little bit of everything, for everyone.

Let’s start with something really amusing – We’re Going on a Bear Hunt is simply a great, traditional, comic family show. The story is based on the book by the fifth Children’s Laureate in 2007, the British novelist Michael Rosen and later adapted for the stage. It’s about a father and his four children, including a baby, who decide to go on a bear hunt and catch a really big bear. It may sound strange at first, but it’s a children’s story after all, and we promise, the kids will love it! You watch the play for four days, from Tuesday to Friday at DUCTAC, Mall of the Emirates and tickets are available at AED 100 and AED150. 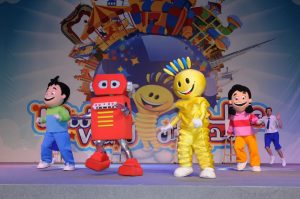 If you prefer to spend the weekend more cost-effectively this time, there’s another option for children’s entertainment. Hamley’s Summer Island is holding free adventures for kids during the Dubai Summer Surprises at The Dubai Mall and Mirdif City Centre. The event will be every week, from Thursday to Saturday, until July 6, 2013. This weekend in Dubai, your children may enjoy various water and sand games, arts and crafts classes, a Hawaiian hula dance, limbo and hula hoop competitions, a music chair, a beach ball relay and a special summer fashion week.

And if you are among those who remember the glamour of disco, you just can’t miss the world’s most popular ABBA tribute band, Bjorn Again! They are coming back in Dubai this Thursday after seven years to bring you all the favourite hits of the legendary Swedish quartet live on stage! Return to the 70’s with the Dancing Queen, Money, Money, Money, SOS and Voulez-Vous, but be prepared – there will be a competition for the best dressed 70’s couple before the doors open at 7.30p.m.! So, don’t wait any longer, get a ticket (AED 295)! The show will be at The Ritz-Carlton, DIFC.

This next activity this weekend in Dubai is for those who love unconventional things. For AED 125-150, you can visit Fitness First’s yoga classes every Thursday, Friday and Saturday which will be held at 7.30 a.m. at Floor 124 of the tallest building in the world. Imagine the feeling of doing your morning yoga from the Burj Khalifa’s At the Top observation deck! Unspeakable!

All Bollywood and Indian music fans will be glad to know that two of the most popular Indian singers of all time are coming to Dubai. Sukhwinder Singh who worked on the Oscar award-winning Slumdog Millionaire song Jai Ho and Alka Yagnik, famous for singing the internationally loved song Taal will present some of Bollywood best tracks. The show starts at 9.00 p.m. this Friday at the Dubai International Convention and Exhibition Centre, but the doors open earlier, at 6.30 p.m. Tickets range from AED 100 to AED 2000.