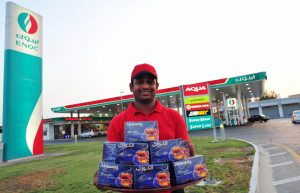 In line with its commitment to give back to communities where it operates in, Emirates National Oil Company (ENOC) and its subsidiaries are marking the Holy Month of Ramadan with its largest array of educational, charitable and community initiatives, several of them undertaken with public and private sector organisations.

ENOC’s Ramadan campaign, titled ‘The Month of Giving’, benefits various sectors of society, ranging from supporting non-profits, to increasing awareness of Islamic virtues, and distributing food and other items to the underprivileged, among others.

Building on the success the campaign gained last year, ENOC will again be taking part in the Al Ajer initiative launched by His Highness Sheikh Majid Bin Mohammed Bin Rashid Al Maktoum, Chairman of the Dubai Culture & Arts Authority. The programme aims to promote the values of forgiveness and tolerance, especially during the Holy Month. ENOC will place posters and materials conveying the message of the campaign at selected ENOC/EPPCO service stations.

Another key initiative, held in collaboration with Alokozay, is the ‘Dates & Water’ campaign, where packs containing dates, water and prayer beads are distributed to motorists at all ENOC/EPPCO service stations 30 minutes before Iftar. ENOC was the first fuel retailer to introduce the concept of providing dates and water at service stations in the UAE in 2002, and last year over 100,000 boxes were distributed to people.

“These social, cultural, educational and charity initiatives underline our commitment to support the community and share with them the spirit of solidarity, compassion and camaraderie that mark Ramadan,” said Saeed Abdullah Khoory, ENOC’s Chief Executive Officer. “These activities, planned specifically for the Holy Month, also highlight the importance we place on making a positive difference to society.”

ENOC is also hosting special initiatives for its employees, including its annual series of Ramadan lectures, to be held at the ENOC Auditorium every Monday from July 23 until the end of Ramadan. During the lectures, renowned Muslim scholars will address ENOC employees on various beliefs, customs and practices related to the Holy Month.

On August 9, volunteers from ENOC and its various subsidiaries will take part in a Dubai Chamber of Commerce & Adopt-A-Camp initiative that aims to distribute 5,000 care packages across worker camps in the city. These packs will include a three-month supply of toiletries, one month’s supply of food and other essentials.

ENOC has also embarked on an internal awareness campaign on the healthy way to fast and promote well-being during Ramadan. This will include a series of competitions among employees to enhance their knowledge about fasting and its benefits.

The Ramadan initiatives are part of a series of community campaigns supported by ENOC, aimed at reaching out and giving back to society – across social, environmental and economic sectors.

In the past, ENOC has raised funds for Beit Al Khair Society, The Red Crescent Authority and Dar Al Ber Society through donation boxes that were placed across all ENOC and EPPCO service stations in Dubai.