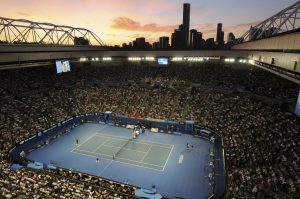 Abu Dhabi Al Riyadiya 2 today announced that it will broadcast the 2010 Australian Open Tennis Championships, The tennis grand Slam of Asia and the Pacific, live and exclusive from 18th â€“ 31st January. The television channel, which is owned by Abu Dhabi Media Company (ADMC) will provide daily coverage for the duration of the tournament starting from 3.30 am UAE, 2:30 am KSA until around 5:00 pm UAE, 4:00 pm KSA in co-ordination with the completion of each day of play. The coverage will be available on Abu Dhabi Al Riyadiya 2 with English commentary.

For the first time, the channel will set up a team of analysts and reporters at the event in Melbourne to support the live studio coverage from Abu Dhabi which will be anchored by Osama Amiri with guest analysis from 2 leading regional tennis personalities. The Abu Dhabi Al Riyadiya TV reporters in Melbourne will provide viewers with unique tournament insights, features and exclusive interviews with the leading players and personalities from the world of tennis. The programming line-up will also provide viewers with the opportunity to interact with the presenters and analysts in Abu Dhabi by sending questions and comments for discussion live on-air, through the web site at www.adtv.ae/australianopen.

In addition to the live tv coverage of the key games from the event, Abu Dhabi Al Riyadiyaâ€™s Australian open website will also gear up to serve as a comprehensive online resource for its viewers and will feature tv schedules, viewer competitions and live score trackers.

â€œThe Australian Open is the first of four Grand Slam tennis tournaments held every year and we are proud to be covering it live and exclusive for tennis fans in the Middle East,â€ said Mohammed Najeeb, Director of Abu Dhabi Al Riyadiya Channels. â€œTennis is a popular and growing sport in the region and we have no doubt that the new additions to our coverage will prove to be a success with our viewers. In addition to analysis from experts on the game and exclusive interviews with star players from Australia, we have also included an element of interactivity for our viewers.â€

â€œAbu Dhabi Al Riyadiya Channels are offering its audiences a comprehensive range of sports entertainment options, and we will continue to explore new ideaâ€™s to bring the best sports to our viewers.â€