A fine wine and spirits shop has opened in Dubai International Airport’s Terminal 3 selling some of the rarest wines in the world, duty free. 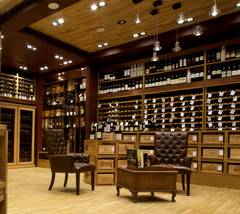 Le Clos presents to the most discerning customers the greatest range of exclusive wines and spirits available today. It offers a selection of many of the rarest and most sought after wines in the world, from great vintages of the past, to newly released icons.Â  The shop lists over 400 wines, with France, Italy and the US heavily represented. South Africa, Spain, Australia, Chile and New Zealand make up the rest of the collection, alongside high-end spirits such as 40-year-old single malts.

The newly opened outlet boasts some of the world’s most sought labels, such as ChÃ¢teau Petrus 1947 ($12,500/bottle), ChÃ¢teau Cheval Blanc 1961 in magnum ($15,750) and Domaine de la RomanÃ©e-Conti 2005 ($27,778/bottle). One of the quirkier items for sale is a $125K Dom Perignon guitar case. The branch also stocks a number of New World wines, including vintages from Napa icons Opus One, Harlan Estate and Screaming Eagle.

Retail outlets of Le Clos have opened in the First Class Lounge and on the shopping concourse in Terminal 3 of the Dubai International Airport. The building exclusively services Emirates flights arriving, departing and transiting through the city. The new facility promises to make travel with Emirates an experience to remember rather than a simple means to an end. Built to the absolute highest specification, it caters for passengers every need and ensures their journey is more than comfortable.

Le Clos in Dubai is run by Maritime and Mercantile International (MMI), a subsidiary of The Emirates Group.
The store will be available to all passengers transferring through or departing Dubai on Emirates flights serviced by Terminal 3.