The recent drop in oil industry investment brought on by weak prices threatens to significantly slow supply growth in the long term, and could lead to a shortage when it comes to meeting global demand, the International Energy Agency said in its five-year oil market forecast released Monday.

That may happen even as crude stockpiles in the U.S. and elsewhere climb over the next few years, the IEA said in its “Oil 2017” report.

This year, it’s “evident” that under the Organization of the Petroleum Exporting Countries-led production cut agreement, output reductions are taking place just as production from the non-OPEC sector, led by the U.S., is recovering.

This ample supply, even as output cuts are implement, is the reason for the “very flat crude-oil price futures curve on which our five-year forecast is based,” the IEA said. 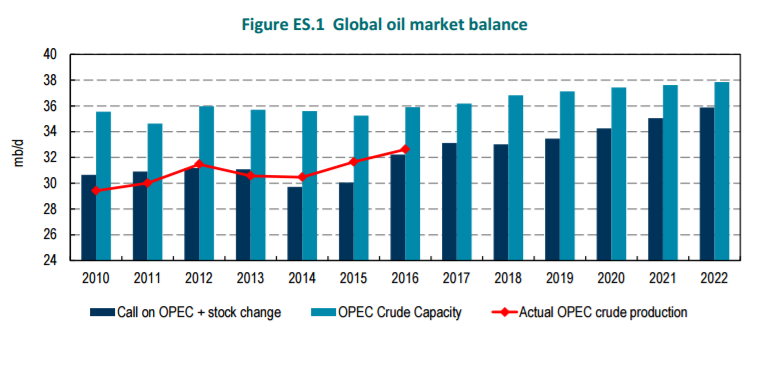 Brent crude futures traded on the ICE Futures exchange in London have traded in a tight range between $53 and $58 a barrel since the start of the year, while West Texas Intermediate crude on the New York Mercantile Exchange has traded between $50 and $55 this year.

The key takeaway from the IEA report is the “looming imbalance,” Matt Parry, IEA senior oil economist, told MarketWatch by email from Paris.

A large potential supply deficit may take hold around 2020, “as demand growth is consistently forecast to outstrip projected increases in global oil supplies,” he said. “A net demand gain of 7.3 [million barrels per day] is forecast [for] 2016-22—vastly exceeding the projected supply growth of under 6 mb/d.”

The IEA report said that demand and supply trends point to a tight global oil market and in 2022, spare production capacity may fall to 14-year low.

For now, “we are witnessing the start of a second wave of U.S. supply growth, and its size will depend on where prices go,” Dr. Fatih Birol, the IEA’s executive director, said in a statement. “But this is no time for complacency. We don’t see a peak in oil demand any time soon.”

“And unless investments globally rebound sharply, a new period of price volatility looms on the horizon,” he said.